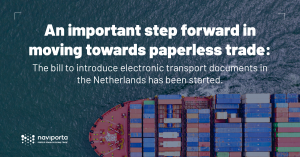 An important step forward in moving towards paperless trade; The bill to introduce electronic transport documents in the Netherlands has been started.

Subscribe Be the first to hear our latest news

The Netherlands is about to change its civic code, so eBL’s will have the legal equivalence with the paper document. Finally electronic documents can be used to its full potential. The logistical use case (via the Infrastructure of the Naviporta platform) of the Dutch Blockchain Coalition, the Port of Rotterdam Authority and Blocklab has led to the drafting of this bill by the Ministry of Infrastructure and Water Management and the Ministry of Justice and Security. The bill creates a legal basis for blockchain innovations, such as the tokenisation of the e-BL.

The carrier declares by means of the Bill of Lading that he has received certain goods, that he will transport them to a certain place and hand them over to a designated person, and under which conditions the transport will take place. Until now, it was not possible to endorse so-called to order Bills of Lading electronically. The bill now makes it possible to ‘endossess’ order Bills of Lading electronically, i.e. to transfer them to another party.

In the international transport of goods by sea, as in many other areas, electronic files are increasingly being used instead of paper documents. It is therefore of great importance that all parties involved can trust that these electronic documents have the same value and meaning as their paper equivalent. At the same time, the bill also regulates the electronic waybill. The bill, presented by the Minister of Legal Protection and the Minister of Infrastructure and Water Management, provides for a regulation of the electronic transport document (bill of lading and waybill) in the Civil Code for maritime transport and combined transport with a maritime route.

Read the full article via the website of Dutch Blockchain Coalition here.